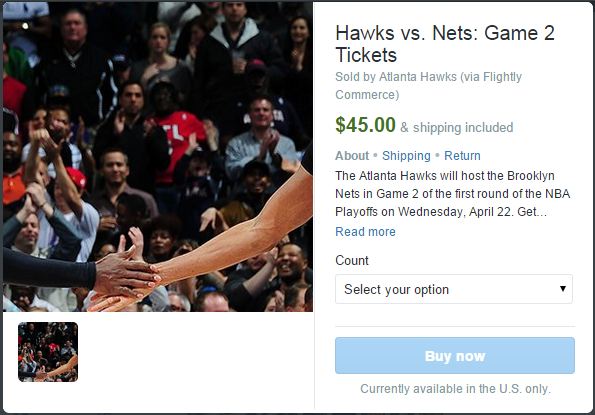 Since late 2014, Twitter has been slowly unveiling its Social Commerce Buy Button tool. We’ve seen offers range from clothing, donations, and the latest offer comes in the form of sports tickets thanks NBA’s Atlanta Hawks.

On the surface, it’s a strong fit. Sports teams have very active social followings. And it doesn’t take much to realize that their fans are some of the most passionate people on this planet. But is Twitter’s Buy Button as strong of a fit as it can be?

The issue of “variables” gets brought into the picture at this point. Sure, selling general admission tickets is an easy process. But when you bring variables such as seat numbers, pricing points for seats, and managing the inventory, things can get a bit tricky. Options only allowed for the same price in designated sections of the arena. It’s not the prettiest solution, but it definitely is a move in the right direction for the industry as a whole.

According to Recode.net, “While shopping-enabled tweets have popped up on the platform since the launch, they haven’t appeared in a big way. Ticket sales could change that, especially considering that former Ticketmaster CEO Nathan Hubbard is the head of Twitter’s commerce division.”

2015 will be a defining year for Social Commerce. We’re excited. Are you?